#HoaxAlert: First Slave Owner in America WAS NOT a Black Man

First off, it should be noted that the man portrayed in the above image isn’t Anthony Johnson, but more ironically, Lewis Hayden. It is ironic because Hayden was actually an African-American leader who escaped with his family from slavery in Kentucky. Before the American Civil War, he and his wife aided numerous fugitive slaves on the Underground Railroad, often sheltering them at their house. 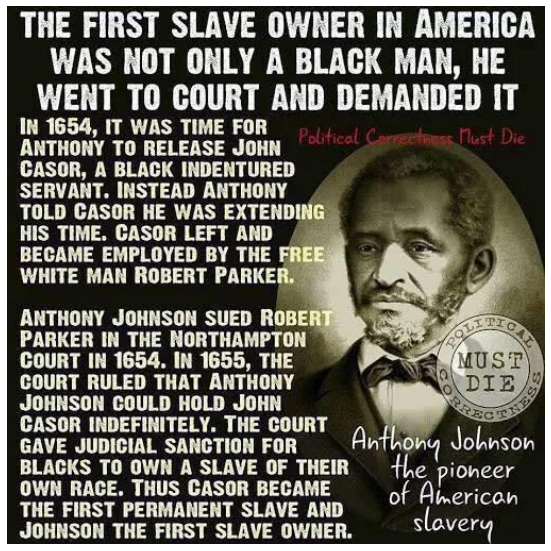 Secondly, while the case of Anthony Johnson and John Casor was not a matter of the first slave owner, it might have been the first civil case involving slavery. At the very least this is the first known example of a black man owning either indenture servants or slaves in the colonies. Slaves had been here since 1619, and all slaves had been “legal” slaves (and thus their owners “legal” slave owners) since the first law legalizing slavery passed. The first man to be considered a slave by a court of law was John Punch, and his owner Hugh Gwyn considered the first slave owner by a court of law.
https://hoax-alert.leadstories.com/671687-hoax-first-slave-owner-in-america-not-black-man.html