#BlackMen, #BlackWomen and #SexualAbuse during #Slavery and Beyond 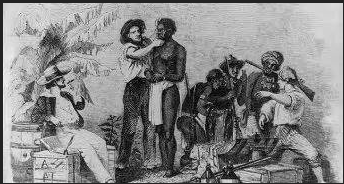 Project MUSE – The Sexual Abuse of Black Men under American Slavery – The rape of Elizabeth Amwood reveals that black manhood under slavery was also violated in other ways that are less easily spoken of (then and now), namely, the sexual exploitation of enslaved men. 7 The historical sexual assault of men and boys is well known, if mostly unarticulated. 8 The scholarship on early America shows us numerous instances of rape and sexual assault of men and boys. Ramón Gutiérrez has argued that individuals of the Native American third sex, or berdaches, were frequently prisoners of war used for [End Page 446] sex and emasculated. We also know through the handful of extant sodomy cases that males have been so abused. The seventeenth-century Connecticut gentleman Nicholas Sension, for example, sexually preyed on his male servants. Virtually all of the cases of sodomy that came to the courts in early America involved individuals violating status boundaries-instructors on students, masters on servants. None involved peers. 9

In the context of slavery, literary scholars have shown that sexual abuse of men was part of the Spanish slave system in Cuba. Robert Richmond Ellis argues that the account of former slave Juan Francisco Manzano “has commonly been regarded as a searing indictment of a physical mistreatment of slaves” but “can also be read as silent testimony to a kind of abuse largely unacknowledged by historians of slavery and critics of slave narratives: the sexual violation of male slaves.” As Ellis points out, the topic has largely gone unexplored for a wide variety of reasons, including the obvious barrier of the historical record in that “male victims of slave rape left behind no biological record in the form of offspring” as well as the prevalent homophobia in traditional Latin American societies, which would have prevented men from telling their stories given that “male sexual passivity . . . was particularly stigmatized insofar as it was seen as entailing a loss of masculinity.” 10
—
Gloria J. Browne-Marshall — excerpted from: Gloria J. Browne-Marshall, Failing Our Black Children: Statutory Rape Laws, Moral Reform and the Hypocrisy of Denial (2002) (Footnotes Omitted) // The Realities of Enslaved Female Africans in America – Colonial laws regarding statutory rape were not applied to Blacks and Indians. Indians and Blacks, as well as their children, were prohibited by law from defending themselves against abuse, sexual and otherwise, at the hands of Whites. A slave who defended herself against the attack of a White person was subject to cruel beatings by either the master or mistress. Liaisons between Whites and Blacks or Indians were illegal. The females of color received the harshest punishment if discovered in a liaison with a White male. Females of color, regardless of their young age, were viewed as seducers of White men. Pregnancy became the evidence of the illegal liaison. A mulatto baby the indicator of the race of the father – White male. The child, by statute took the status of the mother and is thus born into slavery. The full benefit of the relationship and the off-spring enured to the White male. Under English precedent, the status of children was determined by the father. The colonists changed the law to increase the wealth and domination of the White master who had eliminated certain costs of purchasing human labor by becoming “a breeder of slaves.” The Black female, woman or child, was forced into sexual relationships for the White slave master’s pleasure and profit.

White and African abolitionists condemned slavery but often for very different reasons. White abolitionists in Massachusetts in 1712 condemned slavery, not for its diabolical construct, but because the Certain Whites argued for the importation of more White servants and an end to slavery because African slaves were having a negative effect on White servants. The plight of Black and Indian girls sexually abused by their White Masters was a known “secret” of slavery. The girls, their plight ignored, unprotected by law or policy, persevered in silence. Even if the girls acquiesced, consent assumes a right of refusal. Although the institution of slavery remained, the 1807 Foreign Slave Trade Bill proposed the ending of the trafficking of African human deeming it to be “contrary to the principles of justice humanity and sound policy.” It was not a decision based solely on altruism. The drastic drop in profits, a surplus supply of sugar, a fear of continued slave rebellions, in addition to the pressure of abolitionists, led England to abolish its role in the slave trade.
—
The Rape of Black Women by White Men: Systemic Racism Again –
—

There is no discussion of the literally totalitarian system in which black women were usually at the mercy of whites, especially white men, for their material survival. The could be beaten into subservience, including into coerced sexual relationships at any age. This was true during slavery, and often true under the near-slavery of Jim Crow segregation that lasted nearly to 1970.

One son of hers, Dolphus Shields, was listed on census forms as “mulatto” (a derogatory term in origin and use) became a carpenter and church-founding deacon in the city of Birmingham, Alabama.

As for his ancestry, Dolphus Shields didn’t talk about it. “We got to the place where we didn’t want anybody to know we knew slaves; people didn’t want to talk about that,” said Mrs. Heath, who said she assumed he had white relatives because his skin color and hair texture “told you he had to be near white.” …. But as his descendants moved forward, they lost touch with the past.

One of these was his distant granddaughter, Michelle Obama.

The Times asked some leading scholars to comment on this story, and among the acute comments were these:

Henry L. Gates: “Some of this inter-racial sexuality was voluntary, we now know, but far more was coerced, a reflection or a result of a profound imbalance of power. Because of a confluence of factors — the illegality of miscegenation, the prevalence of sexual abuse and rape as the source of these relationships, infidelity, guilt, shame, and disgrace — both black people and white people had a certain interest in keeping these relationships in the dark, as it were.

Annette Gordon-Reed, a visiting Harvard law professor : “That we’ve just started speaking openly about the complexity of black ancestry doesn’t surprise. … There’s also a lot of white Southern anxiety in denials of these tangled blood lines. Acknowledging them requires admitting what went on in the South. . . . Some of those planters really were living like polygamous patriarchs of old with wives and concubines and bunches of kids. That’s the truth of early American history.

Once fully instituted, the two-centuries-plus years of slavery arrangements became much more than a machine for generating wealth. They constituted a well-developed system for the social and sexual control of men and women. During slavery, and later under legal segregation, many African and African American women were sexually coerced and raped by white men, including white sailors, slavemasters, overseers, and employers. Such sexual violence symbolized white male power to everyone in local communities. Under the North American system the children resulting from coerced sexual relations were automatically classified as black, even though they had European ancestry. Indeed, it is estimated today that at least three-quarters of “black” Americans have at least one “white” ancestor. No other U.S. racial group’s physical makeup has been so substantially determined by the sexual coercion and depredations of white men.