Richard Silverstein / Adolf Eichmann: “If I Were a Jew, I’d Be a Fanatical Zionist” – Tikun Olam תיקון עולם – 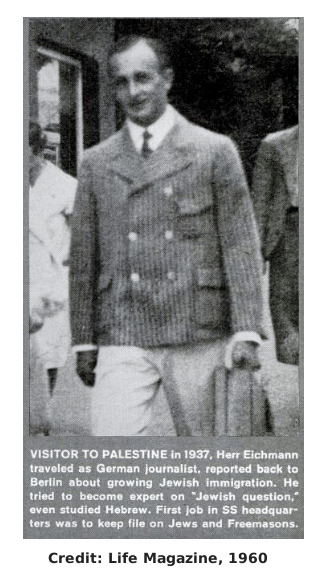 Adolf Eichmann: “If I Were a Jew, I’d Be a Fanatical Zionist” – Tikun Olam תיקון עולם — Eichmann didn’t just visit Palestine in 1937 to meet with the Zionist leadership.  He didn’t just serve as the lead Nazi in implementing the Haavara Agreement.  He actually endorsed Zionism and did so with fulsome praise.  This New York Times review of In Memory’s Kitchen: A Legacy From the Women of Terezin quotes the memory of a Terezin survivor who met Eichmann:

Anny Stern was one of the lucky ones. In 1939, after months of hassle with the Nazi bureaucracy, the occupying German Army at her heels, she fled Czechoslovakia with her young son and emigrated to Palestine. At the time of Anny’s departure, Nazi policy encouraged emigration. ‘‘Are you a Zionist?” Adolph Eichmann, Hitler’s specialist on Jewish affairs, asked her. ”Jawohl,” she replied. ”Good,” he said, ”I am a Zionist, too. I want every Jew to leave for Palestine.”

As if to prove this anecdote is not an aberration, there is an even more explosive story told of Eichmann’s self-identification with Zionism,. It was published in Life Magazine in 1960 under the title, I Transported Them to the Butcher: Eichmann’s Story:

‘In the years that followed (after 1937) I often said to Jews with whom I had dealings that, had I been a Jew, I would have been a fanatical Zionist. I could not imagine anything else. In fact, I would have been the most ardent Zionist imaginable.’

This quotation is reminiscent of one by Ehud Barak, who said:

“If I were a Palestinian, at the appropriate age I would have joined one of the terrorist organizations.”

— The Zionist approach was one of pure expediency.  It was willing to talk to virtually anyone who could help the Zionist cause.  Ben Gurion didn’t care if it was the devil himself.  This is a purely cynical, amoral approach.  One that disturbs us now.  But it’s far better to acknowledge historical truth and critique it, than deny its existence or call those who expose it liars or worse, “anti-Semites.”