Circassian Beauties and the Question of a ‘Pure’ (White) Race

Circassian beauties and the ugly face of race – Al Jazeera English – The long shadow of slavery can also be discerned in this hybrid depiction. American audiences were both intrigued and horrified, given their false association of slavery with Africans, by the fact that Circassian women were among the most sought-after concubines in the Sultan’s harem ­- hence the need to make them appear somewhat African. “Both African slaves and Circassian slaves were subject to sexual exploitation … and this is the point of contact that played so powerfully on white Americans’ imagination,” wrote philosophy professor Gregory Fried. Beyond America’s shores, however, slavery was a multiracial institution, and slaves could sometimes even reach the highest corridors of power, as the Mamluk warriors – slaves mostly from the Caucasus – who ruled Egypt illustrate. The curious case of Dolezal and the Circassian ladies demonstrate just how meaningless the notion of “race” is. 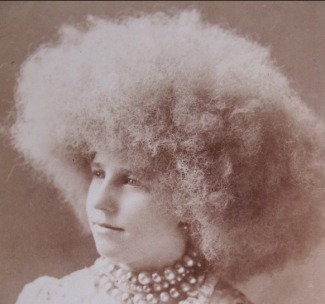 A Freakish Whiteness: The Circassian Lady and the Caucasian Fantasy | mirrorofrace.org – And so Bar­num invented the “Cir­cass­ian Lady,” or some­times the “Cir­cass­ian Beauty,” as a sideshow per­former of a par­tic­u­lar kind. The type included a num­ber of key fea­tures: the woman must be pretty, or even beau­ti­ful, by Vic­to­rian stan­dards; she would wear exotic cloth­ing, gen­er­ally more reveal­ing than that worn by Euro­pean and Amer­i­can woman of that era; she might dis­play strik­ing jew­elry and other orna­ments, such as strings of pearls or richly embroi­dered clothes. And the most telling fea­ture of all: the big hair. This extra­or­di­nary hairdo was entirely Barnum’s inven­tion, but it stuck as one of the defin­ing mark­ers of the “Cir­cass­ian” woman, no mat­ter what cir­cus or sideshow put a Cir­cass­ian per­former on the stage: a huge mass of hair, washed in beer and teased to a frizzy cloud resem­bling what might remind some­one today of an Afro from the 1960s or 1970s. What is espe­cially ironic is the tax stamp on the back of the por­trait of Zulumma Agra: these stamps raised rev­enues for the Fed­eral troops fight­ing in the Civil War, and yet the image traded in part on their tit­il­lat­ing sug­ges­tion of white women sold into slav­ery. It is worth under­lin­ing that this cos­tume and hair had noth­ing to do with how actual Cir­cass­ian women looked, as the illus­tra­tions below indicate. 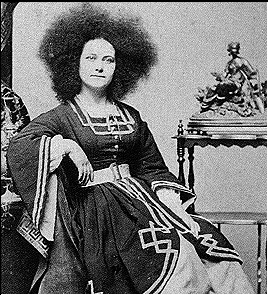 By the early nineteenth century, Circassians were associated with theories of racial hierarchy, which elevated the Caucasus region as the source of the purest examples of the “white race”, which was named the Caucasian race after the area by Johann Friedrich Blumenbach. Blumenbach theorised that the Circassians were the closest to God’s original model of humanity, and thus “the purest and most beautiful whites were the Circassians”.[11] This fuelled the idea of female Circassian beauty.[12]

Circassians are depicted in images of harems at this time through these ideologies of racial hierarchy. John Frederick Lewis‘s The Harem portrays Circassians as the dominant mistresses of the harem, who look down on other women, as implied in the review of the painting in The Art Journal, which described it as follows,

It represents the interior of a harem at Cairo, wherein is seated in luxurious ease a young Turk, attired in the excess of Moslem fashion. Near him, and reclining upon cushions, are two Circassian women, also dressed in the extremity of Oriental taste… On the right is seen a tall Nubian eunuch, who removes from the shoulders of an Egyptian slave the shawl by which she had been covered, in order to show her to the master of the harem; this figure with her high shoulders and the characteristics of her features, is a most successful national impersonation. The Circassian women look languidly to the Egyptian with an expression of supreme contempt, which is responded to by a sneer on the face of the Nubian eunuch.[13]

Orientalizing paintings of nudes were also sometimes exhibited as “Circassians”.

The Circassians became major news during the Caucasian War, in which Russia conquered the North Caucasus, displacing large numbers of Circassians southwards. In 1856 The New York Times published a report entitled “Horrible Traffic in Circassian Women — Infanticide in Turkey”, asserting that a consequence of the Russian conquest of the Caucasus was an excess of beautiful Circassian women on the Constantinople slave market, and that this was causing prices of slaves in general to plummet.[14] The story drew on ideas of racial hierarchy, stating that:

the temptation to possess a Circassian girl at such low prices is so great in the minds of the Turks that many who cannot afford to keep several slaves have been sending their blacks to market, in order to make room for a newly-purchased white girl.

The article also claimed that children born to the “inferior” black concubines were being killed. This story drew widespread attention to the area, as did later conflicts.

At the same time writers and illustrators were also creating images depicting the authentic costumes and people of the Caucasus. Francis Davis Millet depicted Circassian women during his 1877 coverage of the Russo-Turkish war, specifying local costume and hairstyle.

“Horrible Traffic in Circassian Women—Infanticide in Turkey,” New York Daily Times, August 6, 1856 – In the early 1860s, after Russian conquest of their region of the Caucasus, nearly half a million Circassians migrated to Turkey. Many Circassian women, prized for their beauty, were sold into slavery. This article, which originally appeared in a London newspaper, describes this slave economy in detail, including the speculation that the unwanted children of African slaves and Turkish masters were disposed of by infanticide. This report from another slaveholding society would likely have interested Americans, then embroiled in their own deepening rifts over race and the enslavement of African Americans. Barnum capitalized on this interest and began exhibiting a “Circassian Beauty” at the American Museum in 1865. By the 1870s and 1880s, Circassian women were popular attractions at dime museums and traveling medicine shows.

Circassians in Israel – [Wikipedia] – In 1976, the Circassian community won the right to maintain its own educational system separate from the Israeli government’s Department of Arab Affairs. As a result, the community manages its own separate educational system, which ensures that its culture is passed down to the younger generations.[6] The Circassian community of Israel is concentrated almost entirely in the villages of Kfar Kama (population c. 3,000) and Rehaniya (population c. 1,000). In contrast to Circassian communities in other Middle Eastern countries, which have lost much of their traditions, Israeli Circassians have carefully preserved their culture. More than 90% of Circassians return to their villages after completing their military service and studies. Despite the difficulty of finding marriage partners within a community of 4,000, Israeli Circassians mostly shun intermarriage. Although some Arabs moved to Kfar Kama, they quickly integrated into local society and left no lasting cultural impression. Intermarriage is widely regarded as a taboo there. Rehaniya absorbed large numbers of internally displaced Arab refugees during the 1948 war, and as a result, intermarriage with non-Circassians, while still avoided for the most part, became more acceptable there.[7][8]

Circassian diaspora – [Wikipedia] – Circassians refer to their diaspora as a genocide; the diaspora is “perhaps the most pressing issue in the region and the most difficult to solve.”[citation needed] In 2006, the Russian State Duma refused to accept a petition by the Circassian Congress that would have called the Russian–Circassian War an act of genocide.[6] Hazret Sovmen, President of the Republic of Adygea from 2002 to 2007, referred to the Circassian diaspora as an enduring tragedy and a national catastrophe, claiming the Circassians live in more than fifty countries across the world, most of them far from their “historical homeland”.[28] The International Circassian Organization promotes the interests of Circassians, and the advent of the Internet has brought “a sort of virtual Circassian nation” into being.[29]