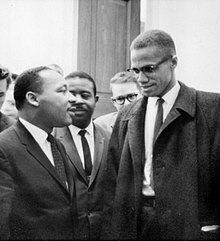 “We went to the Blue Gate Pub,” says the dad-of-two. “It was notorious in those days for racism. Black people were only served in the bar room and weren’t allowed in the lounge or smoke room.

“Indian and Asian people were only served out of glasses with a handle. The plain glasses were for white people only. It was to create that distinction.

“We went into the smoke room. There was a white barmaid who knew me because I had been in there many times before and she said to me, ‘You know we don’t serve black people here’.

“I didn’t make any response. I just wanted to show Malcolm what it was like. The landlady said, ‘If you want a drink, go round the bar’. And Malcolm said, ‘Let’s go round the bar’. He didn’t get upset but he was surprised. He had a brown ale and tasted it and said it was very nice.” Outwardly Malcolm X maintained a calm demeanour, but inside he was disgusted.

via The day I called Malcolm X to fight racism in Birmingham’s white only pubs – Mirror Online.