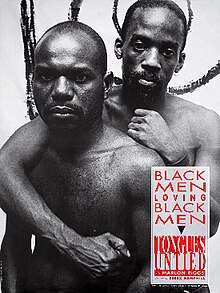 The film blends documentary footage with personal account and fiction in an attempt to depict the specificity of black gay identity. The “silence” referred to throughout the film is that of black gay men, who are unable to express themselves because of the prejudices of white and black heterosexual society, as well as the white gay society.The narrative structure of Tongues Untied is both interesting and unconventional. Besides including documentary footage detailing North American black gay culture, Riggs also tells of his own experiences as a gay man. These include the realization of his sexual identity and of coping with the deaths of many of his friends to AIDS. Other elements within the film include footage of the Civil Rights Movement and clips of Eddie Murphy performing a homophobic stand-up routine.The documentary dealt with the simultaneous critique of the politics of racism, homophobia and exclusion as they are intertwined with contemporary sexual politics. The film is a part of a body of recently released films and videos, which examine central issues in the lives of lesbian and gay Blacks. Riggs’ work challenged television’s generic boundaries of conformity during the late 80s and early 90s. The television documentary during this time was the conventional talking head, expert interviews, and personal testimonials commonly on public affair issues.